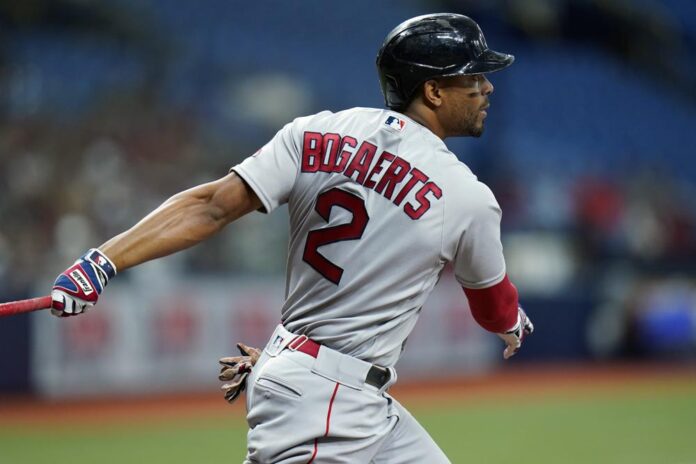 After testing positive for COVID-19 (the latest virus to strike the team), Boston Red Sox shortstop Xander Boerts was removed from Tuesday’s game at Tampa Bay.

Bogaerts scored an RBI single in the first innings, but he was out before the end of the second.

The club announced before the game that Hirokazu Sawamura, the reliever, had tested positive for the virus. Sawamura and Josh Taylor, relievers, were placed on the COVID-19-related injured list. Taylor was a close contact person.

The outbreak that began last week has had a devastating effect on the Boston bullpen.

Before Monday’s Rays 6-1 defeat, Martin Perez (left-hander) and Matt Barnes (right-hander) were added to COVID-19’s injured list. After the game, it was announced that Taylor and first base coach Tom Goodwin were placed in quarantine. Quality control coach Ramon Vazquez also tested positive.

Kike Hernandez, infielder-outfielder, and Christian Arroyo, infielder were both placed on COVID-19 IL Friday. Both remain in Cleveland where they were playing for the Red Sox when they tested positive.

Hunter Renfroe, a Boston outfielder, was placed on the bereavement roster Thursday after the death of his father. He cleared MLB protocols and was reinstated onto the active roster. He played right field and reached leadoff.

Manager Alex Cora stated, “It wasn’t easy, but I try and focus on the positives.”

Boston opened Tuesday with a two-game advantage over Oakland in the race for the second AL wildcard.

NOTES: RHP Brad Peacock was acquired from Cleveland on Monday and started Tuesday’s game. In 2/3 innings, he gave up five runs. He was a Triple-A Columbus pitcher. RHP Raynel Espinal was recalled to the taxi squad. RHP Ryan Brasier could be back from the IL Wednesday after being out of action all season with a strained left calf. For cash, Boston traded minor league OF Delino Dehields Jr. to Cincinnati. … The Red Sox bought the contract of LHP Stephen Gonsalves, Triple-A Worcester.