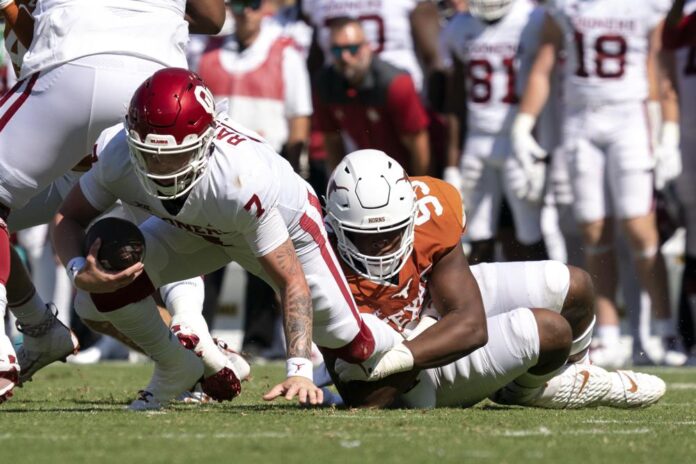 Kennedy Brooks ran 217 yards with two touchdowns in the fourth period, including a 33-yard run with 3 seconds remaining. Oklahoma, which was sixth, beat Oklahoma. 21 Texas beat No. 48 55-48 in Saturday’s Red River rivalry. The game will soon move to Southeastern Conference.

Brooks broke free to sprint to the end zone, while the Sooners (6-0, 3-0 Big 12), appeared to be trying set up for a game ending field goal.

Oklahoma was still behind when Brooks scored an 18-yard touchdown with 7:10 remaining that made it 48-41. After OU tied the game, Brooks’ rush was the first play of scrimmage. He kicked off to Xavier Worthy who was stripped of the ball by Caleb Kelly.

Worthy had nine catches for 261 yards, two scores and his 31-yard TD catch tied it with 1:33 left before the Sooners’ winning drive.

Texas led by 14-0 less than two minutes in the game (4-2, 2-1). After a loss to Arkansas in Week 2, the Longhorns had won three consecutive games and had never lost a game in which they scored at least 48 points.

The Sooners overcome a 21 point deficit to match the second largest comeback in program history. The Sooners won a 21-point victory over the Redskins, and the sold out crowd at the Cotton Bowl Stadium, 92,100, poured onto the field to celebrate.

Caleb Williams completed 15 out of 24 passes for 231 yards and two touchdowns. He was replacing Spencer Rattler who had two turnovers that led to Texas touchdowns. After Williams’ 52-yard touchdown pass to Marvin Mims, Rattler returned to the ball to complete the tie 2-point conversion with 7:25 remaining.

Casey Thompson, the Longhorns’ quarterback, was 20-of-24 passing for 388 yards with five touchdowns. Bijan Robinson ran 20 time for 137 yards with an early touchdown.