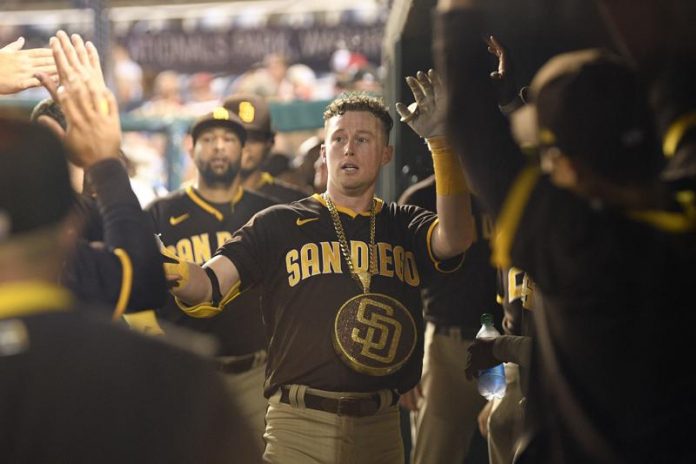 Jake Cronenworth scored his first career run, Wil Myers hit a grand slam with a two-run blast and the San Diego Padres broke a franchise record for runs by beating the Washington Nationals 24-8 on Friday night.

After losing two of their three games to the Rockies in the first half, the Padres had 22 hits against seven batters. San Diego scored in every innings except for the seventh, as the Nationals allowed more runs than any other franchise since 2005 when it moved to Washington. This tied the record for most D.C. history.

Jayce Tingler, Padres manager, said that the team was “just as relentless up-and-down the lineup I have seen.” “The discipline in their zone, just the grinding ability to make them come to the zones, laying out pitches out of the zones. This was the most horrible thing I’ve ever seen in our group.

Cronenworth stated that he had “just tried to put something into play hard” about his sixth-inning at-bat. “It wasn’t easy, but I tried. I did put in some play and some luck and that’s how I put it together.

Cronenworth stated that he fell short of the cycle twice while in the minors.

Myers scored a grand slam in the second inning to cap a seven-run run. He also added a two-run homer and an RBI single in sixth.

Washington was without Starlin Castro, an infielder, who was placed on administrative leaves Friday by Major League Baseball, under its domestic violence and sexual assault policy.

Manager Dave Martinez of the Nationals stated that today was a “rough day” for him. “I’m going home to get over this and I’m ready to play tomorrow.”

Cronenworth’s third cycle was the third in Padres History, after Matt Kemp (2015) and Myers (2018). Charlie Blackmon, of the Rockies (2018), is the only other player who has hit for the cycle against Nationals (2005-present).

Padres: Ryan Weathers, rookie LHP, was placed on the 10-day injured reserve retroactively to July 13. He has right ankle inflammation. Weathers was hurt Sunday against the Rockies.

Weathers suffered from bruising at the ankle and had previously been wearing a walking boot. Weathers has since learned to throw without it. Tingler stated that Yu Darvish, RHP (left hip inflammation), is making progress and Darvish will start at Atlanta on Monday. C Austin Nola (left knee strain) was able to catch five innings during a Triple-A El Paso rehab start on Thursday.

Martinez reports that CF Victor Robles, Nationals, left the game in 2nd inning because of dizziness. With an apparent illness. C Alex Avila (bilateral calves strains) practiced batting on Friday. Martinez stated that he is close to being able to return from the 10-day IL.

Blake Snell, a Padres left-hander (3-3, 4.99 ERA), makes his first career start at Nationals Park. His only prior start against Washington was in 2018, while he was with Tampa Bay. He allowed one run in seven innings. Nationals left-hander Patrick Corbin (7-6, 5.40) defeated the Padres in his previous start, which was July 7, in San Diego.