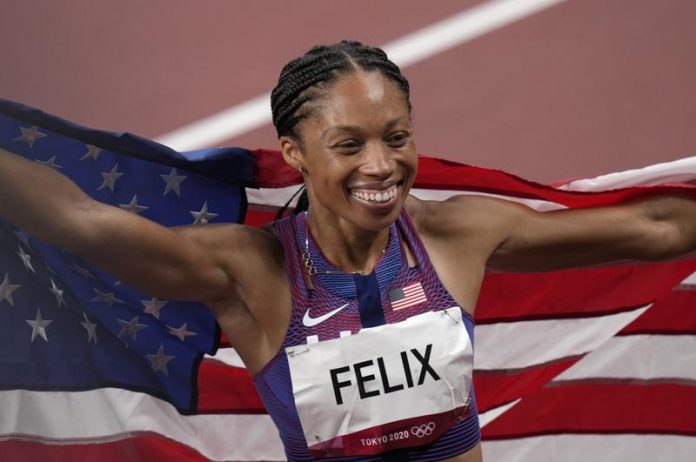 She calls herself “old” but admits that she was not sure she would make it this far. However, there were times when “making it” was not about the Olympics, but rather about simply getting out of bed in hospital.

No wonder Allyson Felix came to these, her last Olympics, with little fear of losing.

It shouldn’t be surprising to anyone that she won on Friday night.

It was not the gold medal for the 400m women’s race. A bronze medal that could end up being the star of her trophy case. It’s medal No. It is the 10th medal, the one that placed her alone at the top.

As she walked through the stadium’s bottom, the 35-year old was beaming. Her bronze medal stood out against her white sweatsuit.

She said, “A lot of the times, I have tied myself to what happens at these championships.” “I didn’t want that this time. I’ve been through so much. I’m always looking for gold. “But I just wanted joy, no matter what happens tonight.

Felix’s 10th Olympic gold broke a tie against Merlene Ottey from Jamaica, and matches Carl Lewis who was the only U.S. track athlete with more medals. Felix may surpass Lewis Saturday when she will be participating in the U.S. 4×400 relay. The all-time record with 12 medals, held by Paavo Nurmi from Finland, is currently at 28.

Friday’s race was started by Felix from Lane 9, the most isolated spot on the track. She was surrounded by a phalanx sprinters, each one younger and perhaps wondering if it could be them to become the “Next Allyson Felix.”

Felix hasn’t spent much time during her long and successful career. It spans five Olympics as well as nearly two decades of running from Lane 9. It’s where the underdogs are.

She said, “It’s difficult.” “You feel alone out there.”

She avoided that one thing that can kill runners: she took off. She resisted the urge to run too fast when she didn’t know where the others were.

In spite of the circumstances, she ran an almost perfect race. She didn’t win. She didn’t win. She finished 1.1 seconds behind Shaune Miller-Uibo, the sprint star from the Bahamas who ripped a gold away from Felix five years ago, when she dove over the finish line in Rio.

This one was painful. It was also painful to finish second in Beijing and Athens. Felix, who was a proudly private athlete for many years, is often remembered as the one who cried in the recesses Olympic stadiums after he won silver.

After the second consecutive loss to Jamaica’s Veronica Campbell Brown at the Olympics, she stated in Beijing that “I don’t want to be satisfied losing.”

She admitted that she was not as young as she once was after a semifinal race. It was wire-to-wire. Unspoken was the possibility that the final might not be a fairytale.

She said, “Obviously, it was not something I wanted to be in, but this is something that I hoped I would achieve.” It was not about being able to distinguish the two. I feel like I have made a lot of progress from the other Games. Although it sounds cliché, it is true. It’s more than me running out there.

Felix’s achievement comes almost three years after Felix helped to start a conversation about how women are treated in track and in sports generally. Nike wrote in pay cuts to women’s contracts for those who became pregnant. Felix cut all ties with them.

Friday’s race was in a shoe she made for a company she founded. She also wore Nike gear because it’s the sponsor of the U.S. team.

Felix spoke candidly about her struggle to recover from a difficult pregnancy which led to an emergency C section and put her life and that of her baby Cammy in danger.

She spoke of the pressure she felt to quickly return, even though her body wasn’t responding as it used to.

She also overcome one of her greatest hurdles: leaving behind her private image to become a spokesperson in a bigger cause.

Felix stated, “It’s been a long journey for me to reach the point where it was possible to believe that I could do so.”

She spoke out about the topic that has been circulating through the Tokyo Olympics: how winning isn’t everything and how the pressure of reaching the podium can make it more difficult.

“When I line up for a race, I’m normally afraid,” she said in a heartfelt essay on social media, posted only hours before the race. “I don’t fear losing. I lose more than I win. It’s just life, and that’s the way it should be.

Felix didn’t have anything to fear at the end of her race. She powered to the finish and beat Jamaica’s Stephanie Ann McPherson by 0.15 seconds. This was a bronze medal that could have been disappointing in other years but not this year.

Felix told her to prepare for Friday’s race. She then went back and viewed some videos that showed some of the struggles she had with Cammy as they faced their own kind of comeback.

She said, “The really, really difficult moments was what I tried to tap into.” “There was a time when we didn’t know if I would make it. At 35, I’m here at the Olympics. You know what else you could want?