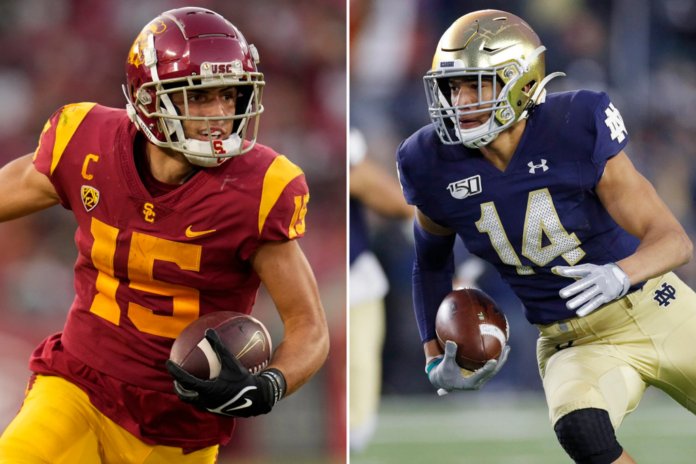 Another season of NFL football is going by and another season of both of New York’s teams, the Jets and Giants, being stuck in the bottom of the league standings. While both teams have been going through what now seems like a perennial rut, with several key positions needed to be addressed, that’s what the NFL draft is for, especially for college football stats experts that have found some serious value in a different slew of players that could seriously help both the Jets and Giants in the seasons to come.

While we can discard the idea of both teams looking for QB’s or any true offensive weapons in the first round, a round in which both teams hold two picks could end up holding two picks each within the first fifteen of the event, there are other areas in which each team needs some serious help as soon as possible. So, with this said, let’s break down what each of NY’s NFL teams should focus on addressing in the 1st round of next season’s draft.

For The Jets, It’s Cornerbacks, Offensive Line, and Defensive Ends

Even though the New York Jets thought they found their franchise QB in Zach Wilson, drafted with the 2nd pick of this season’s draft, the jury is still out from time to time. Given that yes, Wilson hopefully knew what he was going to be facing when taking the job as the starter for the Jets, the former BYU star has still not been able to truly take off and show Jets fans what he’s capable of. With that said, the Jets still shouldn’t have to worry one bit about addressing that department, as Wilson and 2nd tier QB Mike White should have the position covered for the foreseeable future. The running back and wide receiver positions are also pretty much covered and any additions the team wants; they can do with any other of their seven remaining picks in next year’s draft. What the team should truly be focusing on is finding help in the cornerback position, offensive line, and hopefully finding a new defensive end or linebacker that can come in and bring immediate results to the team.

If I was Jets GM Joe Douglas, I would use my first pick, right now at number 4, to try and snag the best CB available, that hopefully being LSU’s star CB Derek Stingley Jr. In all honesty the Jets haven’t been any good in the CB department since Darrelle Revis retired. While this season they have started to show some signs of improvement under new HC Robert Saleh, adding a player like Stingley who is such an impactful player and who can play perfect coverage on any kind of receivers would be a steal and a prize.

If they were to go with picking yet another piece for their offensive line to pair up with young stars Mekhi Becton and Alijah Vera-Tucker, then Alabama’s Evan Neal is a definite must. Neal excels at pass protection and run blocking and he has all the fixings to become a permanent fixture for any offensive line he joins for years to come. If Neal is off the table, depending on where the Jets’ second pick in the first round is at, players like guard Ikem Enkwonu from NC State or center Tyler Linderbaum should be looked at with real care. Lastly, if they were to want to spruce up their defensive line even more by giving CJ Mosley and Quinnen Williams some much-needed help, look no further than DeMarvin Leal from Texas A&M or Georgia’s defensive giant Jordan Davis. Either Leal or Davis would fit in perfectly for Saleh’s defensive schemes and would be impactful players from the get-go.

The Giants Have Back To Back Picks As Of Now, O-Line And Pass Rush Are Priorities

The season for the New York Giants has been negative in all of the positive ways one can find. If you look at their numbers thus far, yes, they have a negative record, but at the same time, they have the best record they’ve held since 2017 at this point of the season. Their team doesn’t necessarily play to anything, but they have still managed to score a win here and there, against the Saints, Panthers, and Raiders. They’re all over the place, but strangely they don’t look as wrecked as one would expect, and to top it all off, if the draft was today, they would have the unusual honor of having two back-to-back picks in the top 10 of the draft, by holding the 8th and 9th pick respectively. So what should the Giants address with those two premier picks? The offensive line and pass rushers should be a top priority for the team.

If they were to go for a pass rusher for example, and given that the best rusher in the draft will most certainly be gone by then, Oregon’s Kayvon Thibodeaux, why not go for the next best defensive stud on the list. Who is it? Michigan’s Aidan Hutchinson. Hutchinson has made pretty good use of his 2021 season to cement his status as one of the top edge rushers in the upcoming draft. His strength and power are off the charts and the skill he has to be able to stop tackles and turn on his dominance in a matter of seconds is something that the Giants would benefit from.

Now that they got their edge rusher, the Giants are in dire need of upgrading their offensive line. Funny, both New York teams even share the same draft needs in most ways. For the Giants, picking Iowa center Tyler Linderbaum is a no-brainer. Why? Because even in a position that’s not looked at with enough respect, Linderbaum is as good as you’ll ever get, with some people even calling him a generational talent for his position. Linderbaum can become a player from which you build an offensive line in the future and the Giants would be geniuses if they end up snagging him before anybody else.