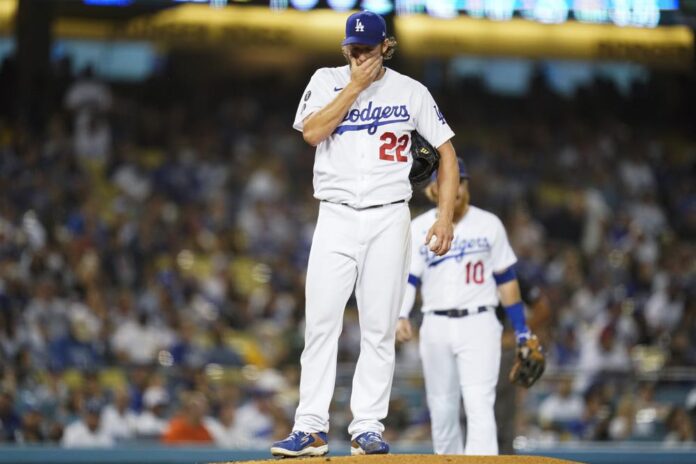 Before they could even begin defending their World Series title in the postseason, the Los Angeles Dodgers suffered a major blow.

Ace Clayton Kershaw left his start with left forearm discomfort during the second inning against Milwaukee Brewers. This is the same injury that kept him out of action from July 4 through Sept. 12.

Kershaw, who was glum, said that “Chances are it’s not looking good for October right now.” “I wanted to be part of this team through October. This team is exceptional.”

Manager Dave Roberts stated that Kershaw will be subject to further testing on Saturday.

In his final regular season start, he gave up three runs on 42 pitches and two hits in 1 1/3 innings. After striking out one, the left-hander walked none and struck out another before feeling enough pain that he had no choice but to end his innings.

He said, “That’s what’s hard right now, knowing that it’s going be a challenge even to contribute at all next month.”

After seeing Roberts wince several times, a trainer and Roberts went to the top of the mountain to check on him.

Roberts stated that it was hard. “Last year was the home start and you don’t know what your future holds. It should be something special for him, his family and me.

Kershaw left the field and, rather than giving up the ball as pitchers do when replacing them, he kept it in his hand.

“Probably shock. He said, “I didn’t know I was holding on to the ball.” “Probably should’ve given it to Doc.”

After this season, Kershaw may be eligible to become a free agent. It could have been Kershaw’s last appearance with the team, depending on his health and whether or not the playoff-bound Dodgers advance to the postseason.

He said that he hasn’t yet gotten his head around the fact that “as far as any other goes, I haven’t wrapped my mind around it” and that he doesn’t intend to soon.

Kershaw was defeated by Arizona in his last outing. He allowed four runs, three earned, and six hits in just 4 1/3 innings. The result was a 7-2 loss.