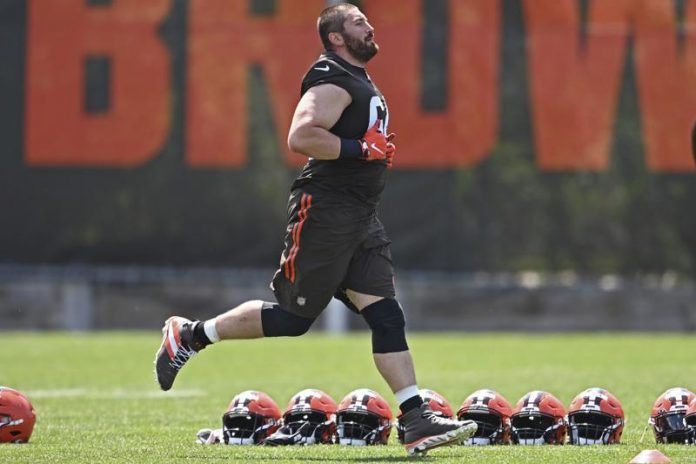 JC Tretter, President of the NFLPA and Browns Center, feels that the NFL is trying shame players by requiring teams to have different colored wristbands for vaccinated and non-vaccinated players.

He called it “nonsensical.”

Tretter took office as COVID-19 was still in its early stages. He said that he was thankful the Browns did not adopt the wristband policy.

Tretter stated that it is easy to spot who hasn’t been vaccinated, as those who choose not to have the shots must wear masks and follow other protocol.

Tretter stated, “They claim they need a difference between unvaccinated or vaccinated players. We already have one.” The unvaccinated players must wear masks. Because they are aware that it is not necessary, no other leagues use scarlet markings or helmet decals or wristbands. The teams also know who’s vaccinated.

The NFL explained that the wristband policy was designed to make it easier for the club or league to identify players who are not vaccinated.

The league sent a memo earlier this month to 32 franchises. It noted that many teams had asked about best practices for monitoring protocol compliance at their facility, especially considering the protocol modifications that were made for fully vaccinated people.

“Please note that clubs will need to create a way to visually identify Tier 1 and Tier 2 fully vaccinated individuals starting at the beginning of training camp,” the memo stated. While we recommend using color-coded wristbands and credentials, clubs can use other methods.

Tier 1 and Tier 2 cover team personnel who are in direct contact with players.

Tretter believes the league tried to force players to get the vaccine.

He stated that the NFL had put in place a policy to publicly shame unvaccinated players and make it known to everyone on the field. “It’s not necessary because it’s unnecessary.” We all know who is vaccinated and who isn’t, so there doesn’t have to be scarlet markings on helmets or wrists.

Kevin Stefanski, Browns coach, said that the team voted against wristbands. These are worn at other training camps.

Stefanski stated, “We are not splitting the team over this matter.”

Tretter had previously criticized the league’s recent memo to teams stating that games would be forfeited if there was a virus outbreak among non-vaccinated players. Players will also not be paid. When the policy was first announced, the NFLPA stated that it used the same basic rules as last year.

The NFLPA informed its members via email that the only difference this season was the NFL’s decision by the NFL to impose additional sanctions on clubs responsible for the outbreak. The protocols that we agreed to together helped us get through the entire season without missing any game checks. They are also effective when they are followed.

Tretter stated that with the number of cases in certain areas increasing due to the Delta variant, it is crucial for the union and league to work together.

Tretter stated that although it was not perfect last year, everyone worked well together as they needed to. This year, it is going to be difficult again. We will need to rely on many things that we did last year, which includes meeting the protocols and the way we worked together.